I wrote this Lesson Note Nursery 1 Third Term Mathematics Week 8; based on the Nigerian National Early Childhood Education Curriculum. Particularly, I used the Pre-Primary Teaching Schemes that the Education Resource Centre, Abuja developed. As a result, this lesson note is suitable for use in any Nigerian school that adopts the National Curriculum. NOTE:  I wrote an extensive article 0on the latest 9-Year Basic Education National Curriculum. If you haven’t read that, click here to read it up. Also, click here to check our official schemes of work based on the latest 9-Year Basic Education Curriculum.

As with the rest of our notes, the primary focus of this lesson note is to present an enriched content for the topic. This lesson note, also like the rest, provide guide for teachers on how to deliver the content to attain the topic objectives. In this regard, I adopt the modern teaching style in Mathematics as NERDC specified. Unlike most lesson notes you may find around which focuses majorly on cognition, I brought out and set objectives to cover other domains of education – affective and psychomotor.

The teacher to deliver this lesson must understand that teaching numeracy at the early age entails much more than rote memorization and singing/demonstrating rhymes. Yes, these are effective tools for teaching the pupils how to remember what you have taught them. But much more, the question of numeracy – much as all of the topics at this level – serves as the foundation for the pupils’ progress in the subject in future academic engagements.

Major Cause of Mathematics Anxiety

After teaching Mathematics at pre-primary, primary, secondary as well as tertiary level; I can categorically say that the majority of the numerous issues that students have in Mathematics is due to poor foundation.

A common point that most early years’ teachers miss in teaching numeration and notation is the aspect of the concept of numerical values. Any Mathematics Teacher in higher classes starting from Primary 4 upward will attest to the fact that majority of the learners finds Number Bases difficult due to their lack of understanding the concept of values of numbers. Even now, you can take the percentage of the primary level learners upward that truly understands the concept of value of numbers above 10. A simple question to test this is: Why do we write 10 as 1 and 0?

What you should do?

Despite that many early years’ teachers are coming to understand this and consequently adjusting the focus of their classes, more are yet to. Consequently, you should not only measure the success of your class by how your Nursery One pupils are able to recite and perhaps identify and write numbers 1 – 500. You should also evaluate to see how many of them truly understands the underlying concept of every topic. It is in this regard that I urge you to also focus on the affective objective of this lesson.

The pupils had in the previous terms learned the following:

Ø  Orally asks the pupils questions based on the previous lesson

Ø  Teacher shows the pupils a house model – made of the shapes to be learned; then asks the pupils what model it is. After identifying it, s/he tells them a story that portrays a need for building a house. Hence, the teacher relates the story to the house by telling the pupils that the model is how the house looked like. And also that they are going to build a house to meet the need.

Following the introduction, the teacher revises the concept, values and symbols of numbers 1 – 45 as I discussed in the previous lessons.

Succeeding the revision above, the teacher leads the pupils to repeat the counting exercises.

He or she puts up the stand of 45 counters. Then sliding each counter to the other side, s/he together with the pupils, counts until the counters finish from one side. The teacher repeats this by sliding each counter back to the original position and again – several times. The teacher may invite willing pupils to lead the counting by sliding the counters as the entire class counts.

NOTE: The teacher may make the counting into rhymes to aid memorization. S/he may begin that with common counting rhymes such as one, two, buckle my shoes, one two three four five, once I caught a fish alive, etc.

Subsequent to the counting exercise, the teacher teaches the pupils to identify the shapes for the week. S/he displays the house model once more – the model should be made of the shapes in such manner that each shape has different colour from every other. 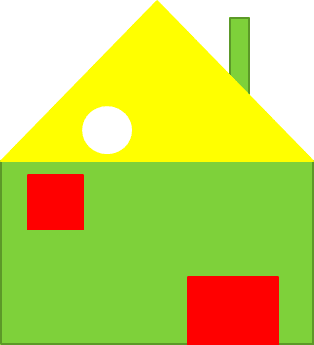 After counting the parts of the model, the teacher asks the pupils which of the parts look alike. The pupils may identify the like either by colour or shape. Whichever, it is the same and acceptable: 6 & 4 are alike while 5 and 1 are also alike.

Succeeding this grouping, the teacher asks how the pupils identified the parts that are the same – what makes them realize that the parts are the same? They should say colour or shape – how the parts look or something in the manner. Once this happens, the teacher appreciates the pupil(s) and then explains the meaning of shape as in the following:

The teacher explains shape means how something looks like when the out lines are joined. To further demonstrate the meaning of shape, the teacher takes a rectangular object, places it on the board and draw the outline – the line round it. Thereafter, s/he tells the pupils – pointing to the outline on the board – that the look of that outline is called shape.

After explaining the meaning of shape, the teacher explains further that there are many types of shapes – that means, different things can look in different ways when their out lines are joined. S/he continues that the different kinds of shape have different names. Hence, the teacher tells the pupils that the name of the shape on the board – outline of the rectangular object – is called rectangle.

Succeeding this, the teacher identifies the other kinds of shapes in steps thus:

Differentiate between Rectangle and Square

After teaching the pupils all of the shapes, s/he may make it into rhymes which s/he sings with the pupils.

After identifying the types of shapes, the teacher teaches the pupils to identify and count the number of shapes.

First, s/he refer to the house model; picks one of the shapes – i.e. part of the model – and asks the pupils to identify the shape by calling the name. Thereafter, the teacher asks the pupils how many of each shape is in the model.

Subsequent to the pupils’ identifying and counting the shapes that make up the model, the teacher shows them everyday objects that have the shapes discussed; then s/he asks the pupils to identify the shapes and count how many of them are there. Examples of such things include door, books, windows, white/black board, desk, tin and cans, candy cubes, the classroom, etc.

Succeeding the counting of the parts of the models, the teacher gives the pupils a pack of the shape models then directs the pupils to count each of the shapes that is present in the mix.

Steps to build the house model

After demonstrating the steps to build the house, the teacher directs and guide the pupils to do the same. The teacher ensures that the activity is interactive.

Before proceeding to the rest part of the lesson, the teacher assesses the pupils’ understanding of the concept of shapes. S/he does this by asking/giving them the following questions/exercises: 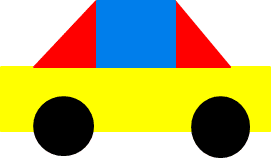 Step 6: Revise recognition of the symbols of Numbers 1 – 45

After the counting exercises, the teacher reminds the pupils that each of the numbers has its own way that we write it. Thus, s/he explains that they are now going to learn how to we write each number – 1-45.

NOTE: The teacher uses the concrete number models, charts and white/black board to demonstrate each number.

Succeeding the counting/recognition exercises, the teacher tells the pupils that they shall now revise how to write numbers 1 – 10.

The teacher first revises the writing patterns. S/he may give the pupils a quick exercise to make the patterns.

REMARK: Take note of the pupils that have difficulty with the patterns. And endeavour to take any child back to the needed prerequisite skills for the writing exercise. DO NOT HOLD THE CHILD’S HANDS – it is outdated. With the right basic skills, most children of 3 to 3.5 years are able to form and write numbers on their own.

Following the writing pattern exercise above, the teacher proceeds with the tracing exercises thus.

Copy and share the link above with your colleagues. Earn ₦100 for each person that register through your link.