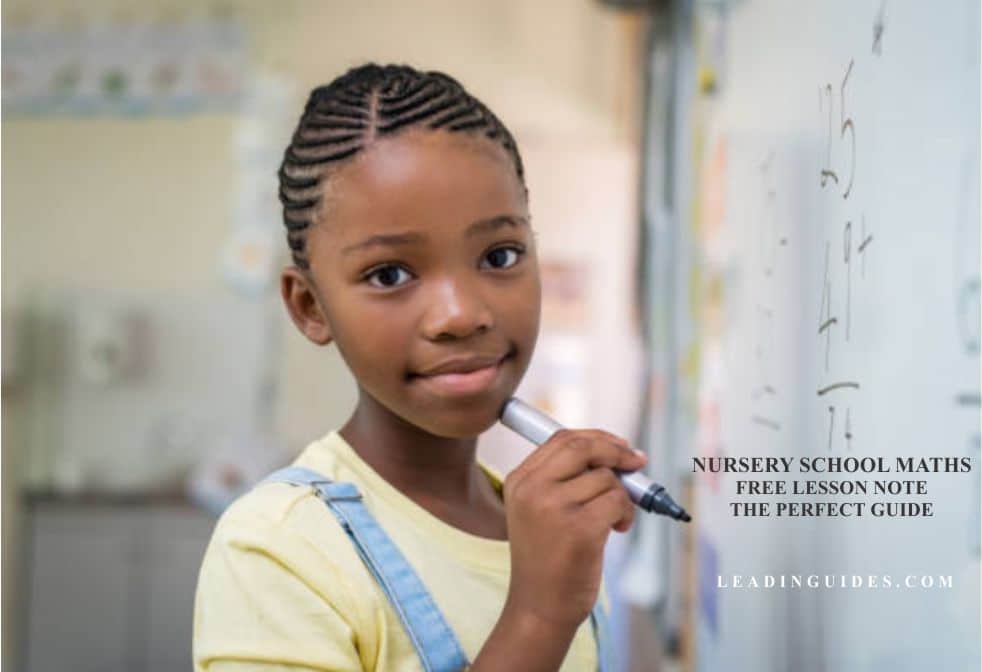 I wrote this Lesson Note Nursery 1 First Term Mathematics Week 7; based on the Nigerian National Early Childhood Education Curriculum. Particularly, I used the Pre-Primary Teaching Schemes that the Education Resource Centre, Abuja developed. As a result, this lesson note is suitable for use in any Nigerian school that adopts the National Curriculum.

As with the rest of our notes, the primary focus of this lesson note is to present an enriched content for the topic. This lesson note, also like the rest, provide guide for teachers on how to deliver the content to attain the topic objectives. In this regard, I adopt the modern teaching style in Mathematics as NERDC specified.

Unlike most lesson notes you may find around which focuses majorly on cognition, I brought out and set objectives to cover other domains of education – affective and psychomotor.

The pupils had in the previous lesson learned the following:

To introduce the topic, the teacher does the following:

A. Orally asks questions based on the previous lesson:

B. The teacher thence shows the pupils large colourful painted design of number 11 & 12. Then s/he asks the pupils who knows the name. Following the pupils’ attempts, s/he tells them that they shall learn the two numbers and also create their painted designs during the week.

C. Following that, the teacher explains that before they learn the new numbers; they have to revise the numbers they have already learned. Therefore, the teacher revises the previous lessons by explaining the following:

After the teacher has finished teaching and explaining the numbers 0 – 9, s/he tells the pupils that those are the numbers there is.

S/he thereafter tells the pupils that we however usually have more things than these numbers 0 – 9. The teacher continues that once the number of a thing is one more than 9 – i.e. if one already has 9 and then gets one more – then we say the person has a bundle.

The teacher demonstrates this by arranging ten bottle covers (or the available counters) into the improvised container of ten.

If resources are available, the teacher may show the pupils number 10 video illustration and sing number rhymes with them.

Before proceeding to the other part of the lesson, the teacher assesses the pupils’

understanding of the concept of numbers 1 – 10. S/he does this by giving the pupils the

NOTE: Teacher may re-ask or explain questions in local dialect. S/he should allow volunteer pupil to count the pencils in Aliyu’s hands. Note that Aliyu here means a pupil in the class – ensure to use the child’s name.

III. Concept of the value of number Eleven & twelve (12)

If resources are available, the teacher may show the pupils number 11 video illustration and sing number rhymes with them.

Succeeding the explanation and rhymes, the teacher leads the pupils to cut out and/or design their number 11 model after the sample s/he showed the pupils earlier.

Succeeding the above, the teacher repeats the explanations and exercises under 11 for number 12. See summary below.

He or she puts up the stand of two counter. Then sliding each counter to the other side, s/he together with the pupils, counts until the counters finish from one side. The teacher repeats this by sliding each counter back to the original position and again – several times. The teacher may invite willing pupils to lead the counting by sliding the counters as the entire class counts.

Prior to continuing with the lesson, the teacher makes numbers 1 – 12 into rhymes and leads the pupils to recite it. If resources are available, the teacher displays and narrates the video before and as the class sings the rhymes.

Henceforth, the rhyme shall be sung at regular intervals throughout the duration of the lesson/week.

V. Recognition of the symbols of Numbers 8 & 9

Prior to doing this however, the teacher revises the symbols of numbers 1 – 7 as s/he taught them in the previous lessons as follows:

For reinforcement, after the teacher has revised the symbols of number 8 & 9 and if the resources are available; the teacher plays the videos and leads the pupils to sing and demonstrate the rhyme for each number.

Cut several cards and write different numbers ranging from 0 to 9 on the cards. Then pack the cards into a container such as a carton. They may be duplicates of numbers.

Note here that the highest number that should be in the container of cards is 9. That way, pupils will be aiming to pick the card bearing number 9.

Teacher should also take note that container should be closed with a little allowance for free movement of the pupils’ hands in and out of it. If the container is open, then each pupil should be made to look away or close their eyes while picking their card.

The teacher creates a spin board of clock face with number 1 – 9 and a fixed arrow indicator. Each pupil spins the board to rotate very fast; whichever number that the board stops completely as indicated by the arrow, the pupil gets equivalent number of sweet as reward. If the board stops in-between a number, the number that is just past indicates the pupil’s win.

In the last next of the lesson – which the teacher may teach concurrently with the rest; the teacher aims to achieve the affective objectives for the topic. This is internalization of the concepts of numbers 4 & 5. By this I mean the pupils should not only be able to reel and sing the rhymes of numbers, but also demonstrate understanding of the concept in normal everyday living.

Hence, after teaching the concepts of numbers 1 – 12 as I have discussed; the teacher ‘challenges’ the pupils with exercises on practical living. S/he does this, first with concrete things, then picture reading and matching of numbers to objects exercise on paper.

While the topic lasts – say each day of the week or at two or three intervals per day, the teacher brings a variety of objects to the class. The items should be of varying numbers between 1 – 5. Then the teacher asks the pupils individually – first as planned group activity during the lesson then individually at different times and randomly – to name the object (out of the variety) that is one through five in number.

Subsequently, the teacher may personalize the questions with each pupil. S/he does this by asking each pupil the number of any of the pupil’s possession that is one through five in number. For example:

As part of the feedbacks to parents for the week, the teacher may also tell them the exercise. The parents can help in the challenge by asking pupils during activities at home. The parents are to ask pupils to identify or name the number of objects that the parents already know to be one through four in number. Nonetheless, enjoy the feedbacks of parents who will proudly tell you their child could say things that are moreJ!

Complimentary to the activities above, the teacher repeats the same challenge during picture reading. For this reason, the teacher collects beautiful pictures of objects – things that appeals to children such as animals (to some), cars (to some), soldiers, cartoon characters, etc – teachers may find out pupils’ interest by asking them or their parents.

Take for instance, “Look at this beautiful animal, do you know the name of this animal? Good! Elephant. How many elephants can you see in the picture? Correct! One! Everybody, look at one beautiful elephant”

Matching of numbers 4 & 5 to objects exercise on paper

Should there be no Mathematics textbook or workbook with matching exercise available, the teacher can form worksheets or write out the exercises on the pupils’ exercise books.

Note that this exercise reinforces the exercises on writing pattern, hence the objects and numbers have to be in column – at least the first exercise, others may be slanting line.

NOTE: The objects and numbers are in rows to ensure up and down movement of the writing pattern for the week. For each of the exercises, the teacher explains and demonstrate how to solve it to the pupils. The teacher follows this with quick class activities – which the pupils perform under the watch and direction of the teacher. Then s/he duplicates the exercises as many times as possible for individual pupil’s practice – may be home work.

In the last part of this lesson, the teacher teaches the pupils how to form horizontal writing strokes. For guidelines on this, please see my Pre-Writing Lesson Notes.

The teacher asks the pupils (either individually or in small groups) to count numbers 1 – 12.

Go to the playground. Pick 12 stones. Bring it to me.

More exercises as I discussed during the lesson.

The teacher concludes the lesson by recording pupils’ performance and if necessary, providing feedback to the parents for needed home assistance including suggesting/giving them the video clips for their children.