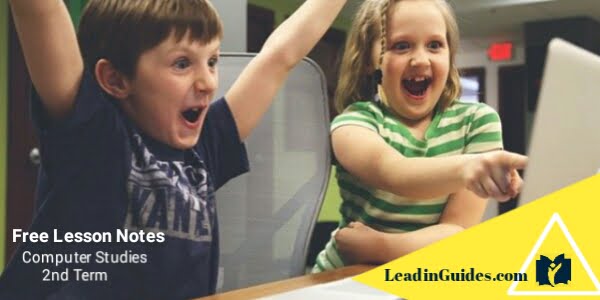 This Lesson-Note-Second-Term-BST-Computer-Studies-Week-1-Primary-1 is a leading guide for teachers on how to teach week one topic in Computer Studies for Primary One during the second term of the academic session.

I prepared this Lesson-Note-Second-Term-BST-Computer-Studies-Week-1-Primary-1 based on standard Computer Studies Scheme of work for Junior Secondary School 1 – 3 by various state ministries of education.

The state ministries of education on the other hand prepared these schemes according to the new 9-year basic education curriculum. The Nigerian Educational Research and Development Council (NERDC) is the official developer of the Nigerian National curriculum frameworks. The revised 9-Year BEC reviewed the number of subjects in Nigerian schools from twenty (20) to a maximum of ten (10) for JSS 1 – 3. The developers did this by adopting a conceptual framework that identified and grouped related subjects under one composite subject. Under this structure, Computer Studies (or Information Technology) is under Basic Science and Technology. The other subjects under Basic Science and Technology are Basic Technology, Physical and Health Education and Basic Science.

Accordingly, teachers may this deliver lesson in the first week of second term of the academic year.

Who may find this useful?

These lesson note guides will be useful to all teachers  especially those in Nigeria, parents who want to help their children keep up, school owners and school administrators who want their teachers to do things right.

Note however that this guide does not favour a particular lesson plan format. Instead, it is a general suggestion that can be adapted to any format of choice. The focus of the note is to provide enriched lesson content and then suggest ways of delivering such content.

Date: Look up the day that the timetable for the committee fixed the subject and the particular date that the teacher intends to teach the subject.  E.g.: Monday & Wednesday, November 11 & 13, 2019.

Duration: Based on the timetable, what is the cumulative duration of the subject for the week in which the teacher will deliver the lesson? E.g. 90 minutes, 45 minutes each

Age: What is the average or range of ages of the children in the class? The students in Junior Secondary School One are typically within the ages ranging between 5-7 years.

Class Composition: How many pupils are in the class? Typical population of students in a class arm for private schools is usually a maximum of 25 – 30 pupils with mixed abilities and moderately quiet.

Topic: Using the computer to play games and for typing text

NOTE: This topic span week 2 – 3. Hence, in this week, I treat using computer to play games.

Gibson, E. (2017, May 11). Children and video games: a parent’s guide. Retrieved from The Guardian: https://www.theguardian.com/technology/2017/may/11/children-video-games-parents-guide-screentime-violence

At the end of the lesson, the students should have attained the following objectives:

From first term the pupils defined computer, identified different kinds of computer and computing devices, identified the parts of computer. These shall serve as entry requirements. Pupils that did not do these lessons may not

The pupils shall actively participate in the class by asking and answering questions. They shall ask and answer questions. And they shall play and/or compete in the games, complete assigned challenges and carryout written assignments.

The teacher presents the lesson in order of the following steps:

To introduce the topic, the teacher asks the pupils to mention what they do/like to do during their leisure time (hobby). The teacher takes note of pupils that may mention playing with computer. Afterwards the teacher reveals that there is an interesting thing that some people do with their computer which greatly entertains them. S/he discloses that that activity is known as computer game.

Subsequently the teacher writes/displays the topic and explains the lesson objectives to the pupils.

In continuation of the lesson engages the pupils in a short probe in an attempt to define computer games.  After that, the teacher thoroughly explains the meaning of Computer Game:

“Computer Game is a computer activity where people interact with objects displayed on a screen for entertainment or to learn.”

The teacher picks the keywords/phrase in the definition and explains.

Computer Activity means something/work that people do with a computer. “Interact” means that people communicate or react to the screen objects. This means the screen objects says or expects the player to do a specific thing – i.e. carryout a particular action – at a given moment. And when the players do the action exactly, s/he scores a point and is often given another task. The teacher explains further that sometimes the screen objects give limited time to perform the action. And if the player fails to complete the action within the time, s/he has to restart again. The teacher reveals that most computer games have smooth sweet background music and sound (effect) to give a pleasurable feeling.

The teacher explains that the object on the screen is one, combination or all of text, image and animation (moving image).

For entertainment or to learn

After discussing the meaning of computer game, the teacher leads the pupils to discuss the benefits of playing computer game. Thereafter, s/he encourages them to play it as regular as possible especially for the benefits s/he shall outline and discuss.

Hence, to initiate the discussion; the teacher asks the pupils whether it is right or wrong to play computer game – and why? After the ensuing discussion the teacher lists and explains the importance of playing computer game. I mentioned some below.

Computer games involve certain rules. This means that the player has to think carefully before making any move to ensure that they stay within the required rules of that particular game. The player needs to make split- second decisions that will determine whether or not he or she will advance to the next level.

Playing computer game may require both visual and audial memory. The player is required to read or listen to the instructions which might only be provided at the beginning of the game, thus the need to remember them throughout the entire game. Mastery of the keys on your keyboard helps you easily move your characters in the game. This helps improve your memory, whether short- term or long-term.

Computer games especially action games, have proven to be able to capture the player’s attention for the entire period of the game. This is brought about by the player’s need to achieve certain objectives within the game, and be able to progress to the next level.

Before proceeding with the lesson, the teacher advises the pupils briefly on ethics of computer game. This is especially for schools in the urban region where the pupils are likely to get too attached to computer games/gadgets.

The teacher explains that although computer game has many good benefits, they must take care not to play computer game in a way that reduces their ability to do other things. S/he teaches that playing computer game in this way is called game disorder. Therefore, the teacher demands volunteer pupil(s) to describe such manner of gaming that may constitute game disorder – i.e. to mention any game behaviors they think might be bad.

Succeeding the discussion, the teacher outlines the following computer game rules and explains to the pupils:

5.      Examples and Selection of Computer Games

Subsequent to the brief lesson on ethics of computer games above, the teacher leads the pupils to identify some age-appropriate educational games. After that the teacher selects appropriate games for available computing device/platform – such as android, Mac or Windows devices.

To begin with, the teacher asks the pupils to name any game they know or have played in the past. I present some list of educational computer games below. It is not unlikely that one or two of the pupils will mention popular games like Temple Run, Zuma, Fruit Ninja, Candy Crush, Solitaire, Minecraft, FarmVille, Tetris, FIFA and other similar games. The pupils may also mention games like Grand Theft Auto (GTA), Mortal Kombat and other violent games.

After the pupils name the games, the teacher initiates discussion by demanding what one could learn from each. Generally, these games increase the players’ creativity in addition to the other benefits of computer games that we mentioned earlier. Although research has not been able to find any link between playing violent games and real-life aggression or a child’s academic performance; commonsense demands that adults put some restriction on such games for children of early years. Hence, the teacher encourages the pupils to play more of the former sets than violent games. Similarly, the teacher tells the pupils that the aforementioned games are of general benefits – but this class aims to teach them a particular school subject. Therefore, the teacher tells the pupils that they shall pick and play games in which they will learn a particular subject.

NOTE: These games are available for android, Windows and Mac. For other educational programmes that are appropriate for your platform, I suggest you visit your device app store.

After identifying at least five educational games, the teacher (preferably with the pupils) selects a game which they shall play. Thereafter, s/he demonstrates and describes how to play the game they selected. This basically includes the control and how to score points. Then assuming there is a large wall screen, the teacher invites volunteer pupil to play the game for other pupils to observe. Two or three more pupils may do same then the teacher directs each pupil to power up their device, launch the game and give it a try. While the pupils are playing the game, the teacher moves round to assist any pupil that may have difficulty.

Once the pupils are able to play the game comfortably, the teacher may pair them and assist them to set up multiplayer mode. The teacher repeats the same exercises for another game the remaining two weeks.

This is however different for schools in the rural area or in schools were the pupils have not had much contact with computers. The teacher has to first of all practice controls with the pupils. This may involve using another game that teaches controls. For mouse control, I suggest Zuma game – available for Windows, Android and Mac. Chicken Invader is another good game for mouse control. For screen control, I recommend Asphalt 8 – available for Android, Windows and Mac.

After the pupils have demonstrated some level of confidence at the system, the teacher can proceed to the game as I have described above.

Prior to the teacher giving the pupils the final assignment and terminating the lesson, s/he revises the entire lesson. S/he also summarizes the lesson into a short note which s/he gives to the pupils to copy into their computer notebooks. I present this below.

Before concluding the lesson, the teacher gives the pupils exercises based on the lesson.

To conclude the lesson, the teacher marks and returns the notebooks to the pupils. S/he provides necessary feedbacks and links the week’s topic to the next. S/he says that they have in the week’s lesson learned how to study with computer by playing educational games; and in the following weeks, they shall learn another way of using computer to study by watching educational films.